Finishing 10th in the Bahrain Grand Prix in his Formula 1 debut on Sunday, Zhou Guanyu became the first ever Chinese driver to make it to the highest level race of motor sports.

Zhou shared his thoughts and feelings in an exclusive interview with Xinhua after the opening race of the new F1 season.

Chinese-Dutch Ho-Pin Tung tested for the Renault F1 Team in December 2009, and was announced as the team's third driver in January the next year. In 2011, Ma Qinghua became the first driver of Chinese nationality to take part in a Grand Prix weekend as he replaced Narain Karthikeyan in the first Friday practice session of the Italian Grand Prix.

F1, however, had been waiting for an official Chinese driver since then, until Zhou made his way forward when he joined Alfa Romeo for the 2022 season.

"I did it and scored my first world championship point, which not only showed the best of myself in my dream job, but also a big affirmation of myself," said Zhou, who burst into tears of joy after the race as he became the 66th F1 driver to have scored points in a debut. 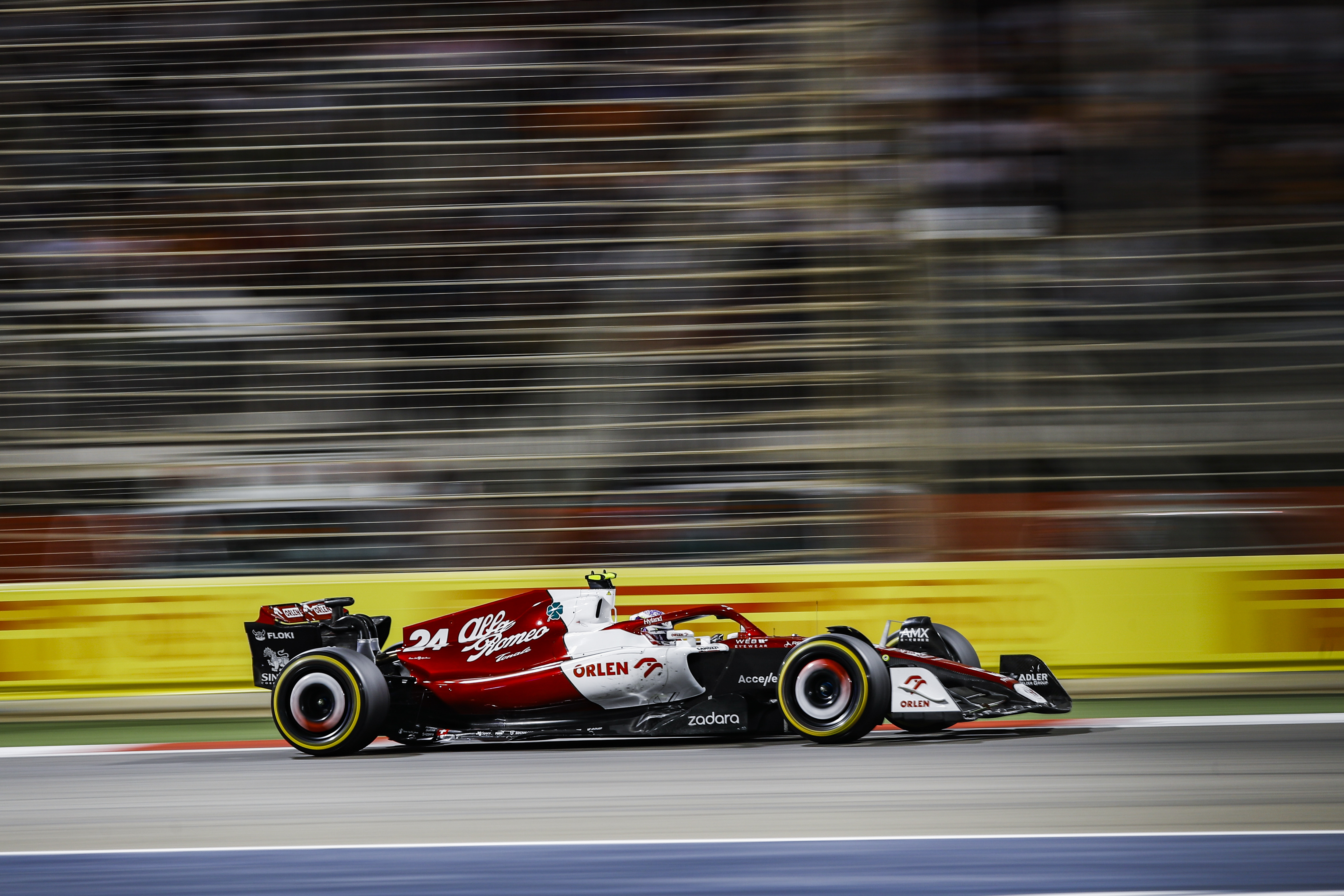 Looking back on the opening race, Zhou could clearly remember the last few laps. "On the last lap, I knew where I was and wanted to make a final push on [Fernando] Alonso to get into the top 10."

"I would be happy with an 11th-place finish on my debut," Zhou recalled. "But if I was so close to 10th, I would give it a shot, no matter how it ended."

With Sergio Perez's unexpected retirement on the last lap, Zhou took his first point, which was a huge relief given the overwhelming pressure he had in the past few months.

"I was so keen to prove myself," Zhou said. "It couldn't have been a better start as I was able to show my ability in the first race. But it's just the beginning, and it's definitely going to get better and better from there."

"Now I feel I deserve this seat and I know I am ready for F1," Zhou said with confidence.

There were questions whether Zhou deserved a F1 contract, but the Chinese driver proved the doubters wrong. "All I can do is to bring the best out of myself."

In his 2021 Formula 2 season, Zhou added a win and a second place finish at the final round in Abu Dhabi to cement his third place in the championship, following three victories in Bahrain, Monaco and Silverstone.

During the Spring Festival this year, Zhou spent plenty of time with his personal physical trainer, the team engineer and the simulator. Jumping from F2 to F1, Zhou explained that the downforce of the car increased dramatically so that he had been strengthening his neck training in the pre-season preparation. 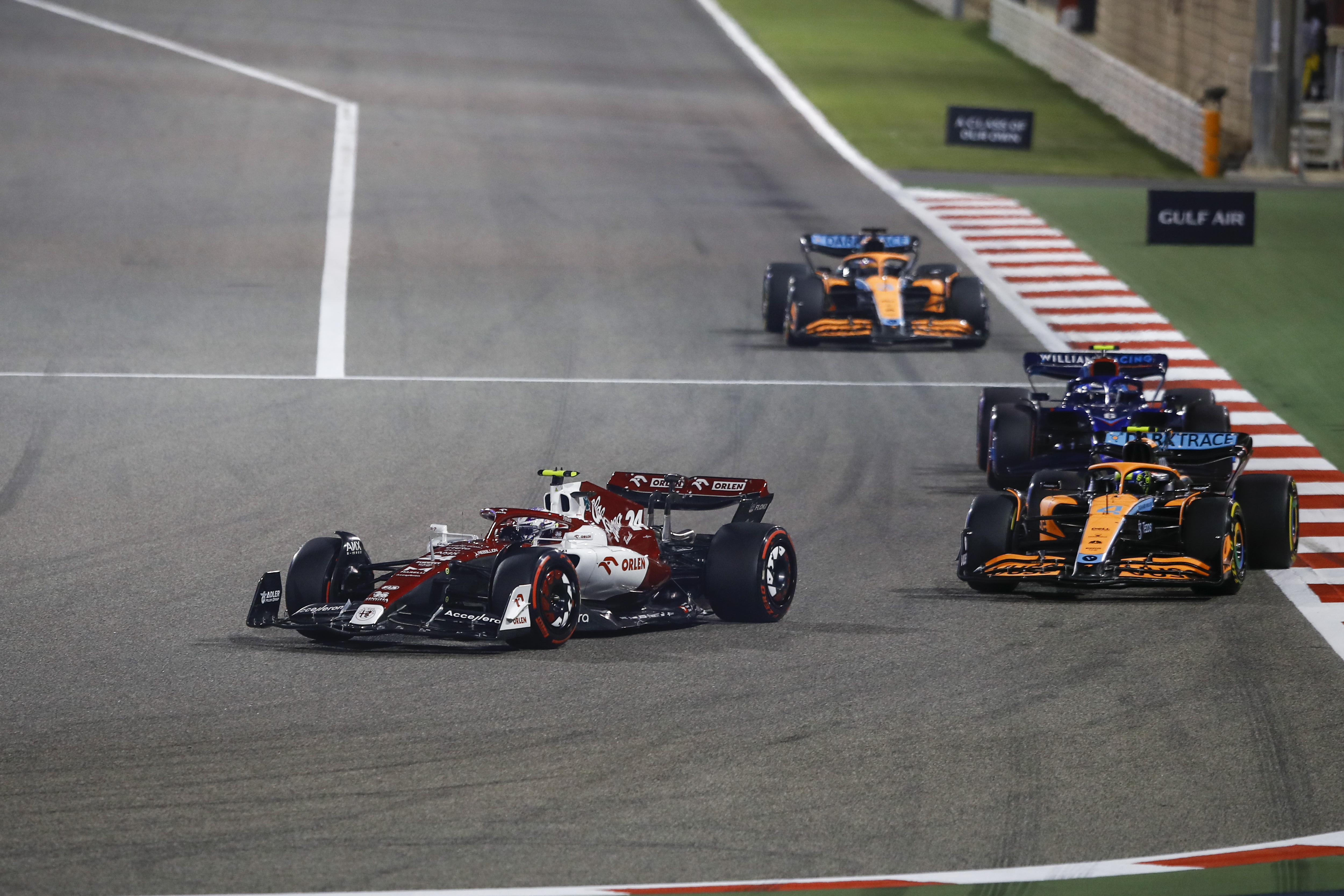 The long duration of the race is also a huge test for the drivers. "F1 cars have multiple electronic systems that require drivers to adjust by themselves," Zhou said. "You need to concentrate for a long time, whether it's how you feel about the car or how you deal with car faults, you need to do it in the fastest time."

In addition to physical training, Zhou also needs to get familiar with the car and the tracks. Over the winter, he was one of the drivers with the longest test mileage, and could be seen in the team workshop very often.

"It doesn't matter who it is. I try to overtake as long as I have the opportunity," Zhou noted.

On the penultimate lap of the Bahrain GP, Zhou was following Alpine-Renault's Spanish driver Alonso and waiting for a good chance of overtaking.

"My car had a little vibration before turn one when I was ready to attempt an overtake," Zhou recalled the moment, knowing that a Red Bull car had stopped and he was 10th but wanted to move a place forward. "I just wanted to keep up with Alonso and bring this point home."

Since F1 came to China in 2004, the Shanghai Grand Prix has attracted lots of attention every year. Then six, Zhou watched Shanghai GP carrying an Alonso flag, and now he's finally competing against his childhood idol.

Zhou was full of emotions talking about the race against his idol. "When I look back on my journey, from holding his flag and supporting him in Shanghai, to joining the academy to learn and grow; from testing together and driving his car, to competing in the same track and finally scoring point behind him, it feels like a dream." 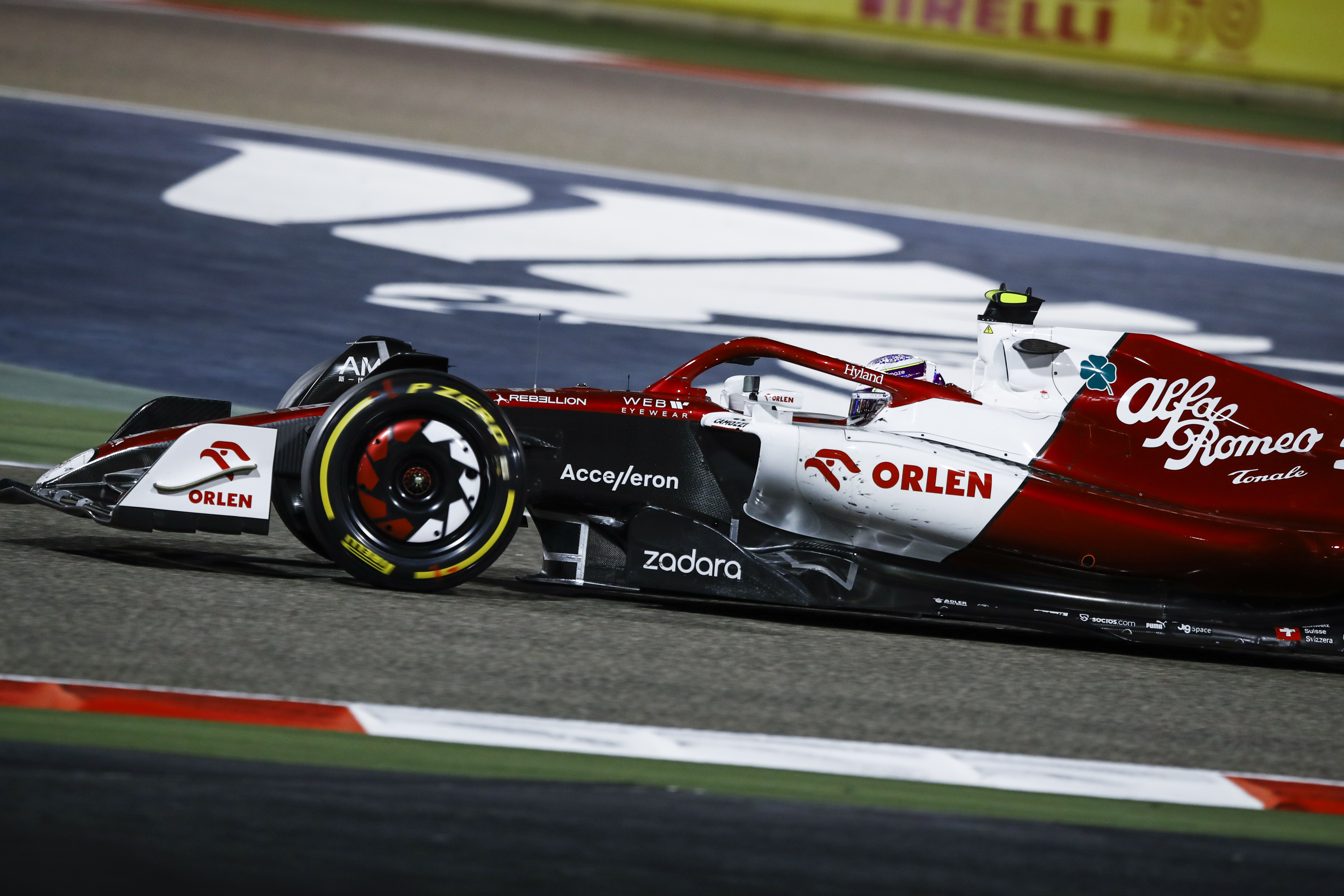 Born in Shanghai in 1999, Zhou had strong interest in racing at an early age and dominated the national championship at 10, just two years after he started racing go-karts. In order to pursue better training in motorsport, Zhou left his hometown of Shanghai at age 11 to study and train in the U.K..

Zhou initially joined the Ferrari Driver Academy before switching to the Alpine Academy (formerly the Renault Sport Academy) in 2019, when he debuted in Formula 2.

"I am very happy about tonight's result: for me, but most importantly for the team, with two cars in the points, and for Zhou who got points in his first race," said Valtteri Bottas after finishing sixth in Bahrain.

The success of an F1 team is inseparable from the tacit cooperation between the two drivers. "Bottas would ask me if I need any help before a race," Zhou said, who was moved by how friendly and easy-going his teammate is.

"It is more about improving together as a team and building competitive cars," Zhou added.

The new technical regulation of the 2022 F1 season witnessed changes in tyres, aerodynamics and many other aspects, which has been a new start for all teams and drivers.

"I am very satisfied and very grateful for the efforts from the team," Zhou said, adding that during the test the car's performance was not stable but gradually improved.

"There was improvement each time and both cars came back with points, which makes me very proud," Zhou added.

AIMING FOR THE PODIUM

Before the Bahrain GP, scoring points was a goal Zhou didn't expect to complete until mid-season. Asked if he would set a new goal after taking a point home on debut, Zhou answered calmly.

"The most practical thing for me now is to maintain the state, and maintain the original goal," Zhou said. "Now that I've got a point, I'm looking forward to more and more points." 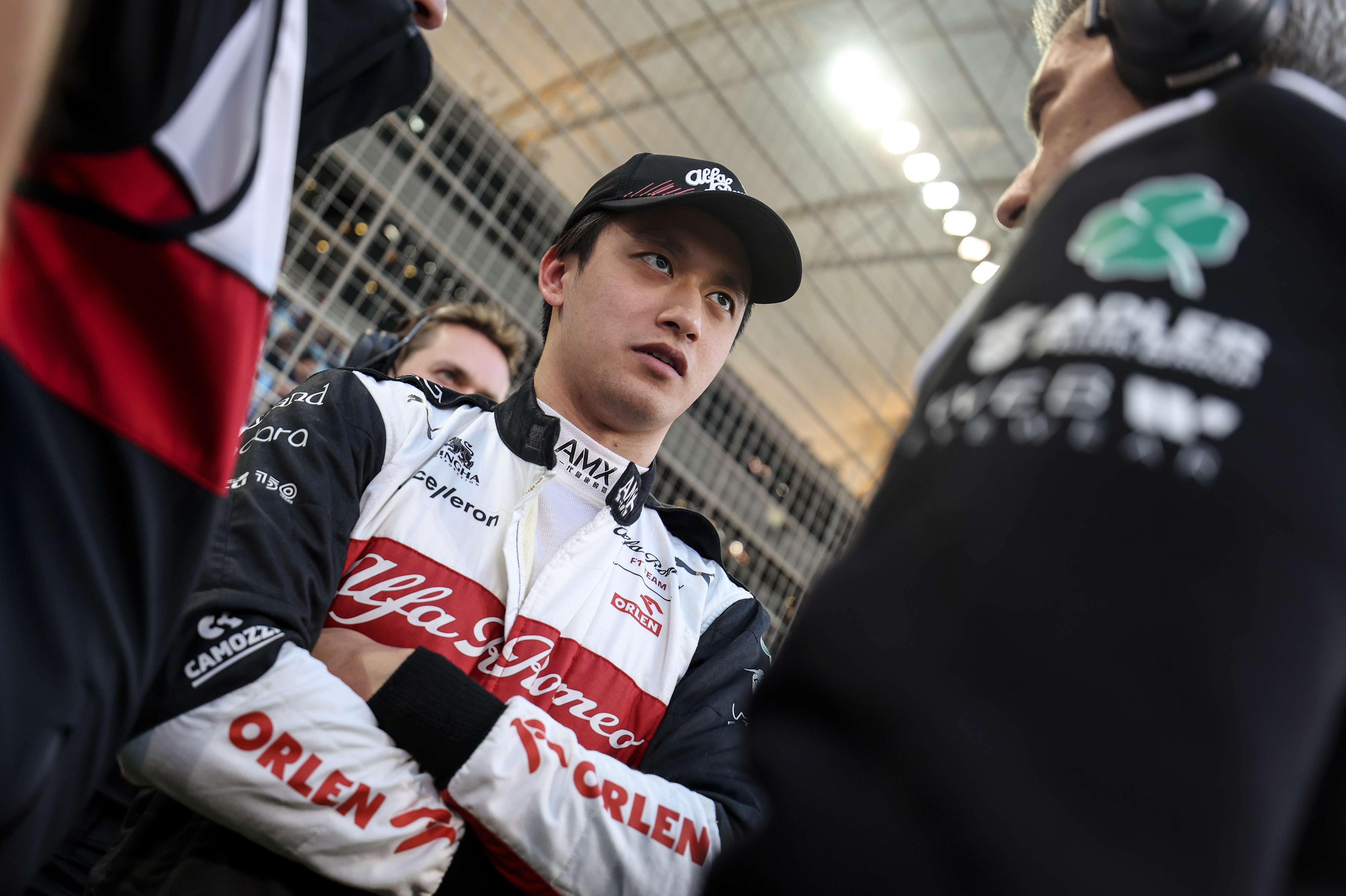 On September 27, 2020, Zhou started from pole position and led all the way to win his first F2 race in Sochi, Russia, raising the Chinese flag in F2 for the first time, and now he is aiming to do the same thing in F1.

"I have brought the national flag with me and hope to see it on the podium in the future." Zhou said.